..
History, romance and tradition centered around the ancient inns, once a familiar part of our national life.  Few records have been preserved to tell the story of this period in South Carolina history.  In early years a narrow, winding road with no grading, few bridges and innumerable gullies connected Charleston with Asheville, NC and the country beyond.  Along this road traveled the state, the sole link with the outside world, drawn by splendid horses.  At intervals were small inns, mostly log cabins in early days.  The "inn" was a popular gathering place for men. 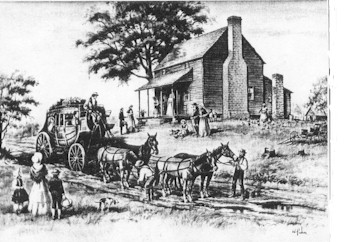 Near the McGee branch was a little hostelry with a bold spring of water in its front yard, which gushed up in a spout two feet high (as told by Mrs. Elizabeth Massey, daughter of Zion Massy, the first keeper of the inn).  Travelers began to call this hostelry the "Inn with the Fountain" and that eventually became the Fountain Inn."

Soon after the war between the states, Mr. Noah Cannon came to this section and bought up land which he divided and sold tracts of land.  By 1886, the village had grown up at the present site and was chartered December 24, 1886.  It might have been called "Cannonville", but the association with the old Inn was too strong and the village was named Fountain Inn.  On August 30, 1886 the C and WC railroad established passenger service with its first train service through the village.  In 1912 the charter was surrendered and the town was incorporated.  Since that day it has grown to its present status with good schools, churches, and several industrial plants.

.    The first school for Negro youth of the community was on a site that now is located across the Atlantic Coast Line railroad track off highway 14 in the vicinity of Bates Street in Fountain Inn.  The Rosewald School on Mr. Zion Drive was completed November 29, 1928.  With the student population of the community steadily increasing, buildings were badly needed.  Therefore, additions were made possible through community efforts.  Building materials and labor were cheerfully donated by patrons and friends of the community.

The Faith Cabin Library, which offered library facilities for the school, was constructed of logs.  Again logs and labor were given by friends and patrons of the erection of this building.  The Peg-Leg Bates Gymnasium, named for the internationally known dancer who is a native of Fountain Inn, was the first gymnasium at a Negro school in the Piedmont section of South Carolina.  Peg Leg raised much of the funds for the building by giving benefit performances at many places in the up-state.  During this time the community again joined in the effort for the establishment of another building.  The gym was competed in 1942.

The last school built for this areas Black population was the Fountain Inn Colored High School which was used from 1948-1953.  The School's colors were Maroon & Gold.
.

.
.
Much appreciation is given to the Greenville Cultural Exchange Center for
providing text, pictures and most of all, - guidance in this historical project.


© 2014 SCIway.net, LLC All rights reserved. No part of this website may be reproduced
or transmitted in any form or by any means without written permission from SCIway.net LLC.